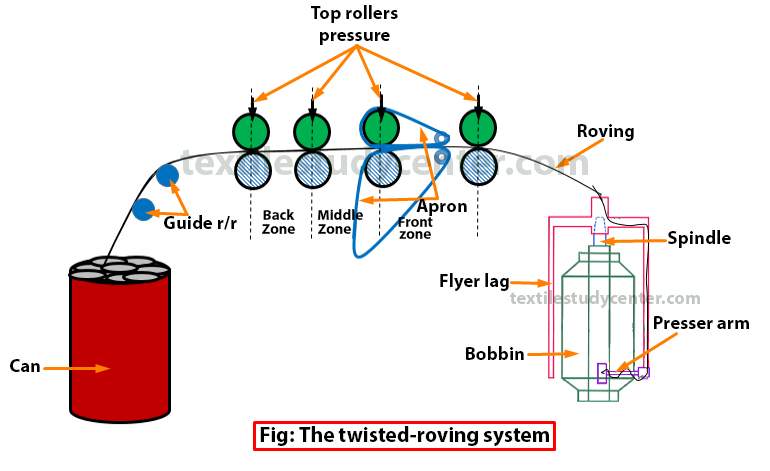 The output from the draw frame is fed into the roving frame (also called ‘speed frame or simplex machine or flyer frame‘) where the linear density of sliver is reduced by drafting and the resultant product is called the roving. After the drafting operation, the roving is wound on the bobbin. During winding, a little amount of twist is imparted to the roving. To draft the drawframe sliver to reduce weight per unit length.

To insert small amount of twist into the roving.

To wind twisted roving onto the bobbin.

Significant of Roving Frame/Why the Draw Sliver is not Direct Used in Ring Machine?

There are two principle region:

The first reason is related to the required draft. The draw sliver is to thick, untwist strand that tends to be hairy and to create fly. The draft needed to convert this to a yarn is in the resign of 300-500.The speed frame process minimizes the sliver weight to a suitable size for spinning into yarn and inserting twist, which maintains the integrity I the draft strands. It is impossible to feed the sliver to ring frame for yarn production due to limitation in draft in ring frame. So the fine twisted roving is better to this purpose.

The second reason is related with transportation and space limitation on ring frame. The draw frame can represent the worst conceivable mode of transport and presentation of feed material to the ring spinning frame.

Creeling: To feed the sliver by the help of several rows of driven rollers to the machine.

Drafting: to reduce the size of the strand

Laying: to put the coils on the bobbins

Winding: to wind successive layers on the bobbin at the proper rate of speed

Building: to shorten successive layers to make conical ends on the package of roving

Doffing: To replace an empty bobbin at the place of full bobbin. Creel is the place situated at the back of the machine where the raw material is placed to be fed to the drafting zone.

Optimum creel tension draft should be selected to control sagging or stretch in drawing sliver.

Drafting is normally carried out by a draft system with double apron capable of working with entering sliver counts of 0.12-024 Ne and counts of the delivered roving of 0.27—3 Ne.

The draft given in the roving process will be in the range between 4 and 20 and can work ﬁbers of a length of up to 60 mm.

It is very important factor which produces strength in the roving and twist is inserted with the help of flyer.

When flyer rotates, the twist is produce in the sliver.

The purpose of the laying operation is to put the successive coils of roving side by side in a uniformly spaced arrangement.

This regular, uniform arrangement is achieved by making the bobbins move up and down at a uniform rate of speed for each layer.

Winding is the process by means of which the roving is drawn from the front roll through the ﬂyer and onto the bobbin.

The rate of winding compared to the rate of delivery at the front roll controls the winding tension.

The building motion is controlled by the steady upward and downward movements of the bobbin rail containing the bobbins and spindles.

It is the optional function of speed frame. Doffing could be done manually or automatically.