Drawing is a process in which a group of slivers or filaments is elongated by passing them through a semi-series pair of rollers/ godet pairs, each pair of roller moving faster than the previous one.

After extrusion of the fiber, its chainlike molecules are in an amorphous or disordered arrangement. The filament fiber must be drawn to develop the desirable strength, pliability, toughness, and elasticity properties. Some fibers are cold-drawn; others must be hot-drawn. Drawing aligns the molecules in a more parallel arrangement and brings them closer together so they are more crystalline and oriented. The amount of draw (draw ratio) varies with intended use, determines the decrease in fiber size and controls the increase in strength.

To decrease elongation at break (EB). Texturing is a treatment in which flat filaments are distorted to have loops, coils, curl or crimps along their length to gain increased bulkiness, porosity, softness and elasticity in some situations.

To gain increased bulkiness, porosity, softness and elasticity in some situations

The second step is to heat the yarn, which breaks bonds between polymers, allowing the ﬁlaments to stay crimped.

The last step is to cool the yarn in the distorted state to enable new bonds to form between the polymers. When the yarn is untwisted or otherwise released from its distorted slate, the ﬁlaments remain in a coiled or crimped condition. Textured yarns can be broadly classified into three categories, which are

These yarns show high stretch, moderate bulk per unit weight and helical crimpiness. The elastic extensibility can be as high as 400%. These yarns are mostly used for the stretch-to-fit type fabrics.

These yarn exhibit increased bulk with little or no stretch, loopy structure and common extensibility. These yarns are also used in shirting, suiting etc.

Textured yarns can be produced by following methods:

It is one of the most popular method to produce high stretch yarn. In false-twist coiling, the yarn bundle is twisted, heated, and untwisted in one continuous operation. A heat-set coil within each filament results; the yarn itself has no twist (hence the name “false-twist). False-twist coiling can be done by the following processing operations:

❷ The feed yarn has little or no twist, the yarn between A and B has false twist and the yarn leaving B has the some twist as the input.

❸ If heat is applied in the zone AX and the yarn is cooled in zone XB, then the yarn approaching B will be heat set in the twisted condition.

❹ When the ﬁlaments relax, the uneven contraction of the filaments causes them to rearrange themselves laterally.

❺ If heat is applied in zone CD, the latent coiled can be developed to produce a bulked yarn in one continuous process. 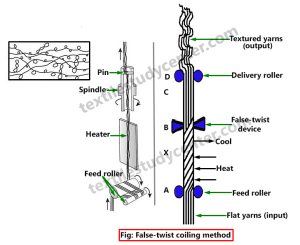 In air-jet texturing, ﬁlament yarns are fed over a tiny blast of air that forces the ﬁlament into loops. This type of yarn is also called air-textured or air-entangled.

Knit-dc-knit crinkling produces a crinkled or wavy conﬁguration. Multifilament yarns are first knitted into a fabric. The fabric is then heat set and subsequently unraveled (dc-knit). The knitting gauge (the number of loops per inch) determines the size of the yarn waves. This technique is frequently combined with the application of dyestuffs to produce uniquely colored and textured yarns for soft ﬂoor coverings.

In gear crimping, intermeshing gears introduce a two-dimensional crimp to ﬁlaments. Heat can be used to permanently set the crimped filaments. Intermingling is a process of imparting inter-filament cohesion by entwining the filaments instead of addition to inserting twist. The entwining is usually achieved by passing the yarn under light tension through the turbulent zone of an intermingling jet (nozzle). Figure shows a simple intermingling nozzle which consists of a yarn channel, and an air inlet in the centre of the channel. The compressed air impinges on the traversing yarn vertically and entwining the yarn at regular intervals.

For thrusting out producing filament end.

Heat setting is a process of imparting dimensional stability of fibers or yarns with successive heating and cooling in dry and most condition.

In the heat setting operation, the ﬁber is heated to its glass transition temperature. At this temperature, lateral bonds within the ﬁber are disturbed and the polymer chains can shift their positions. The fabric is kept under tension until it is cool, to lock this shape into the fiber’s molecular structure. After cooling, the fabric or yarn will be stable to any heat lower than that at which it was set. Higher temperatures may cause shrinkage or other changes. Heat setting may be done at any stage of finishing, depending on the fiber’s heat resistance and end use.

To remove shrinkage of fabric.

To increase elasticity and resiliency.

Fiber color may be change.

Spin finish are the lubricants which provides surface lubricating, plasticizing and static protection to man-made fiber. A package, bobbin, or bale cannot be made without application of a spin finish.  It is applied to the yarn in fluid form just before winding.

To lubricate the filament to control friction

To increase cohesion of the yarn

To plasticize the fabric